In my life, I've loved them all.

Yup. The Fab Four. Those lovable moptops from Liverpool.

This blog is an exception for me. Otherwise, I'm a social networking ignoramus. I rarely use facebook, I don't text anymore, and I have never tweeted. But it seems to me that the fodder for most e-traffic is a constantly revolving cast of Kardashians and Gagas and Lohans and Biebers and Britneys and Bowersoxes, all accelerating toward their sixteenth minute while every ounce of flab or hint of ribcage gives birth to another gossipy webpage. (Somebody explain: who is Snookie and why should I care?)

If we'd had those media in England, in 1963, there would have been one topic only: The Beatles. No others need apply. But all we had was the steam radio, black and white television, and the tabloid press, and it was barely enough to contain the exploding phenomenon of Beatlemania.

You had to be there. John, Paul, George, and Ringo -- that habitual order meant something -- weren't merely the zeitgeist, the right band at the right time to fill the vacuum of the recently discovered "teenage" market. (Kids with money? Who knew?)  The music was astounding, of course, and they were articulate, funny, irreverent, interesting, attractive. But tot up the other innovations. 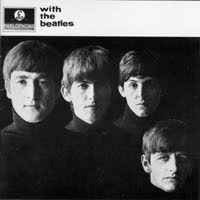 That first British number one hit, "Please Please Me" might have been "How Do You Do It" if the Beatles hadn't held firm on recording songs they'd written themselves, virtually unknown in those Tin Pan Alley days. That second album, With the Beatles, broke new ground with its arthouse portrait on the cover, not your grandmother's portrait of the artist. Elvis had made movies, of course, but who had ever seen a film like Richard Lester's A Hard Day's Night? (I complain frequently about the tedium of my home town, the London suburb of Hounslow, but I swell with pride that the "Can't Buy Me Love" sequence for A Hard Day's Night was filmed within its confines.) In the words to "Help!" and "Norwegian Wood," didn't John Lennon beat Joni Mitchell to the personal confession in song?

And when the screaming got too loud, they retreated with unlimited funds and time to EMI's recording studios, forging new sounds and concepts and techniques that led -- a mere four years from "Love Me Do" -- to the pinnacle of 1967's Sergeant Pepper, with, incidentally, more extraordinary cover art and another innovation with the printing of lyrics on the record sleeve. It goes on.

Who remembers Jimmy Nicol? He was world-famous for two weeks in 1964. Ringo Starr came down with tonsillitis -- front page news, naturally! -- and Nicol, a session drummer, was drafted to replace him. Beatles fans hated him for not being Ringo. Then Ringo returned, every second of his recovery and brief convalescence chronicled by the press. (Thousands of fans had clamored for his discarded tonsils; I thought it would be clever to ask for his stitches.) The tabloids showed one last shot of Nicol, walking away alone toward obscurity, and suddenly we all felt sorry for him and wished we'd been kinder during his fortnight of fame. That was the state of Beatlemania in Britain. There have been teen idols since, but nothing that subsumed everything in the culture.

Of course it has an effect, even though they flourished as an intact quartet for only eight years, and had dis-banded by the time I was fourteen. For me, those iconic lives played out in real time in the daily newspapers, the denouements then unknown -- the shocking death of Brian Epstein, the controversial MBEs, the soul-searching -- mine, I mean -- following the "more popular than Jesus" remark, the retreat to and from the Maharishi in India, the morphing hairstyles, the hint of drugs, the rise and fall of Apple, the rise and rise of Yoko. (I remember press coverage of a pre-Lennon Yoko, protesting the banning of her film "No 4," also known as "Bottoms.")

Lennon's words, in his two books of surreal poetry and episodes, still infect my vocabulary -- "Come out the cow with glasses." ("I'd smashed him with a brick.") Apart from Prince Charles, John Lennon is my only good impression. (Honestly, I can't even do Christopher Walken.) Beatles songs were the first music I played when I learned guitar, and they provided the first chord sequences I stole when I started to write songs myself. I had a massive poster of a crew-cut, Plastic Ono Band-era John sporting a "People for Peace" armband on my bedroom wall.

They epitomized a time I knew as childhood. The opening riff of "I Want to Hold Your Hand" is my madeleine in linden tea. And when, ten years after their whimpering breakup, I snapped on my bathroom radio for the news, only to hear of a murder on New York's Upper West Side, I stood in the shower and wept.
Posted by Alan Beechey