Joltin Joe has left and gone away, and I know how he feels.

Startling realization of the week. That Mrs. Robinson is now too young for me.
Posted by Alan Beechey 1 comment:

Isn't this the plot of that new Johnny Depp movie?

I step into my bedroom/office, where Tertius is sitting at my desk, fiddling with his iPod.

"Now I know where you are," he exclaims cheerfully, showing me the screen. It displays a map that is somehow tracking the location of my iPod.

"You know where I am because I'm standing two feet away from you and you can see me," I remark.

"But this is digital, which makes it more official."
Posted by Alan Beechey No comments:

Planning a Spring break camping expedition to Harriman State Park. Secundus seems to have an unhealthy focus on equipping himself with every sharp implement known to REI. I try jokingly to deflect his demands for a sizeable ax.

"It's just that I don't want to wake up in the tent one morning with my head chopped off," I tell him.


*The trip was postponed because of predicted overnight temperatures below freezing. In April. His mother bought him the ax anyway. And there's a whole other story.
Posted by Alan Beechey No comments:

"You sure look purty in that fig-leaf, Meriwether!"

Tertius finds a nickel in his bedroom minted in celebration of the Louisiana Purchase. I guess that it was issued in 2003, the two hundredth anniversary, which holds T's interest for a second or two because it was the year of his birth. (2003 that is. Not 1803.)

I use the rapidly closing window of opportunity in his attention span to mention that the Louisiana Purchase spawned the Lewis and Clark expedition.

"Only I get them confused."

"A bit different," I assure him.

"Were Adam and Eve real too?"

Ah, now there's a whole other conversation.
Posted by Alan Beechey No comments:

Four years ago, this blog celebrated the hundredth birthday of my friend, actress Sylvia Davis. (If you want to find out more about her, use the "Sylvia Davis" label at the end of this post and read the posts in date order.)

I wrote that Sylvia had found a late burst of popular fame in her nineties because of a brief commercial she did for the Visiting Nurse Service of New York. People would stop her on the street and ask her to deliver the opening line, "I've survived the depression . . ."

I couldn't find it online then, but YouTube eventually yielded up the goods.

Sylvia passed away in November 2010, six months after her centenary celebrations, a rich life well lived. Enjoy her talent and her enduring memory in one of her greatest hits:


Posted by Alan Beechey No comments:

Sex and other failures.

I'm asked to send my publicist a thousand-word excerpt from This Private Plot, so I select a couple of sequences that are self-contained and spoiler-free. Only afterwards do I realize that they're both centered upon misplaced nudity. (Or, to be more accurate, misplaced clothes.)

I'm happy to write "cozy" mysteries. It's my dream to win an "Agatha," the top prize for cozies given at the Malice Domestic conference, since the MWA's Edgars tend to go toward the hard-boiled end of the spectrum. A cozy is typically characterized as having most of the "unpleasantness" take place offstage, whether it's violence or sex. In that earlier post, in which I tallied up eight murders so far in my published career, only three unfold in the real time of the narrative, and two of them are that cozy-safe method, poisoning.

In This Private Plot (one death by hanging, offstage but on cover) I also have a little deliberate fun with the second convention. It's a running gag that Oliver, who is determined to carve his first notch on the virgin bedpost of his teenage bedroom, is constantly thwarted every time he gets close to a moment or two of intimacy with his steady girlfriend, Effie. 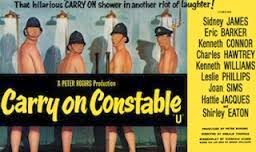 But that's okay, as are the number of characters who seem to lose their clothes during the narrative.
Because it's also a "Traditional British" mystery, and for my generation, frustrated sex and lost trousers are neither tragic nor titillating but just plain embarrassing . . . and therefore a potent source of humor. Or humour.

Here's an extract from the book, which explains it. Oliver is consulting criminal expert Dr. McCaw of St. Basil's College, Oxford, to help him figure out what victim Dennis Breedlove may have done to attract the attention of a blackmailer:


Dr. McCaw thought for a moment.

“Because whatever happened in the past still bothered Breedlove to this day, to put it mildly. And sex is the only thing the British fixate on forever . . ."

She took a sip of tea. “It doesn’t apply to the Europeans,” she continued. “They have an adult acceptance of sexual mores. The American attitude to sex, on the other hand, is positively infantile. But the British, as in so many things, are bang in the middle. They stay mired in their adolescence. They can’t stop thinking about sex, but they never get it right. That’s why the British can be funnier about their sex lives than any other nation.”

Let's hope so, anyway.
Posted by Alan Beechey No comments: