Don't leave home without it.

From observations in the shopping mall and on the street generally, it seems as if it's not enough just to keep your i-Phone in a convenient pocket, you also have to carry it -- illuminated -- in one hand at all times, like . . . well, like no sartorial or cultural trend that I can think of. Victorian gentlemen with their gloves or canes, perhaps?

Did I miss the memo? (Not that I have such a thing as a smart phone. I gave up long ago on being the most intelligent person in the room, but I still want to be the smartest thing on my body.)
Posted by Alan Beechey No comments:

A moment of candor.

I'm a Renaissance man. My body looks as if it dates back to the sixteenth century.
Posted by Alan Beechey 1 comment:

There's no shortage of Simpsons in American culture -- Homer, Jessica, OJ, Ashfordand -- but there's another thoroughly English Simpson whose fame didn't leap the Atlantic, probably because of that very uncompromising, incomprehensible Englishness. Alas, since I don't always check the British headlines, I'm a week or so late in hearing of the death, at the age of 92, of the original and influential playwright N.F. Simpson.

(It stood for Norman Frederick, but his friends called him "Wally," after Wallis, another American Simpson who did leap the Atlantic but in the opposite direction.)

His career and his creativity fluctuated, but he's best known for his extraordinary surrealist domestic dramas, which flourished at the avant-garde* Royal Court Theatre and on BBC radio and television in the late fifties and early sixties. Simpson was surprised when he was compared to "Theater of the Absurd" writers such as Ionesco and Beckett, preferring to acknowledge the influence of Lewis Carroll, James Thurber, and P.G. Wodehouse on his work. (Is it any wonder that I like him?)  Thriving at the same time as Spike Milligan's "The Goon Show" on the steam wireless -- and championed by the likes of Peter Cook -- he was a clear forerunner of the Monty Python school of surreal comedy.

One example. In his most famous play, One Way Pendulum, one character, Kirby Groomkirby -- played in the 1964 movie version by Cook's fellow Beyond the Fringe alumnus Dr. (and now Sir) Jonathan Miller -- likes to wear black. However, he cannot justify this sartorial choice unless he is in mourning, so he must go out and murder people on a regular basis. But before delivering the fatal blow, he makes sure he tells his victim a joke, so that he or she can die happy. Throughout the play, Kirby skulks in the attic of the Groomkirby's home, attempting to teach a hundred I-Speak-Your-Weight machines to sing the Hallelujah Chorus.

*Spellchecker doesn't recognize this word, but throws up the incorrect "avaunt-garde" as an alternative.

**220 pounds in U.S. currency.
Posted by Alan Beechey No comments:

From the annals of grossness.

In a rush to get back to work this morning, I gulped down my morning vitamin supplements with the last mouthfuls of my breakfast cereal.

Imagine the effect of absent-mindedly biting on what feels to your tongue like a fresh blueberry, only to realize a microsecond later -- courtesy of your sense of taste -- that it was your fish-oil capsule.
Posted by Alan Beechey 3 comments:

By gad, sir, you are a character.

Odd recommendation from Netflix. Because I like the 1941 Humphrey Bogart classic version of Dashiell Hammett's The Maltese Falcon, they suggest I'll also like 60s TV cartoon series "Rocky and Bullwinkle."
Posted by Alan Beechey 2 comments:

Back in April, I reported on the sheep-like repetition of the epithet "indie darling" whenever Greta Gerwig was mentioned in a review of the dreadful Arthur remake. I think I got 20,000 Google hits on the phrase. (It's now up to 114,000, although oddly you get even more if you mistype "darling.") 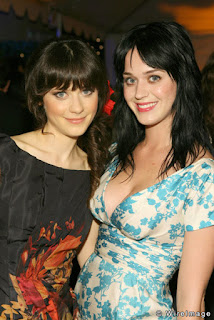 Well, it's happening again. The lovely Zooey Deschanel is in a new TV series in the fall line-up, and she seems to have taken over the label in a big way. Current score for "indie darling Zooey Deschanel": 986,000 hits.

Conclusion: Television reviewers have even less imagination than movie reviewers. But then somehow you expected that, huh?

Mind you, the phrase "Zooey Deschanel and Katy Perry" scores over three million Google hits, which probably all link to posts that speculate whether they're the same person. Well, you can see why from the picture. (Zooey's on the left. Or is she . . ?)

So if there's ever a remake of the Bette Davis classic A Stolen Life, in which she played twin sisters*, think of the money you could save on the special effects by simply casting Z and K.

(Although one of the sisters in the movie was named Kate Bosworth, so perhaps that role should go to the actress, uh, Kate Bosworth. On the other hand, here's a picture of Kate and Zooey together. Not so much of a resemblance.)


*Bette Davis also played twin sisters in Dead Ringers, which was directed by Paul Heinreid, who starred with Davis in Now, Voyager, which gave us that supposedly sexy business of lighting two cigarettes at once and the classic line "Oh Jerry, don't let's ask for the moon. We have the stars." The film also starred (by-then) veteran actress Gladys Cooper, whose grandson, Sheridan Morley (son of Robert) was the official yet posthumous biographer of Sir John Gielgud, who starred in the original Arthur, in which the title character was played by Dudley Moore, and not Russell Brand, Katy Perry's husband, who was in the remake with indie darling Greta Gerwig. I could keep this up all night, you know. Sad, isn't it?
Posted by Alan Beechey No comments:

This afternoon, I managed to travel the length of the Cross-Bronx Expressway, home to three out of the top four worst intersections in the U.S., without letting my speed drop below the posted limit.

So how come when I pick up a Wii remote and race Secundus, I can't go ten yards without hitting a barrier or attempting to drive up the stairs to a pedestrian overpass? More to the point, how come the kids don't have the same problems?
Posted by Alan Beechey No comments:

If the third time's a charm, what's the fourth? Linen? Fruit?

(If it's a fourth wedding anniversary*, it's appliances, according to the modern U.S. so-called "tradition." No doubt the same consumerist folk tradition that gave us the ceremony of dancing round the Maytag, ha, ha ha.)

Anyway, I'm honored to have been asked for the fourth time to do some workshops at the annual Young Authors Conference for the best creative writers in Westchester County's high schools, also known as the best gig in the Universe.


*If it's a fourth wedding, it's called have-we-learned-nothing.
Posted by Alan Beechey 3 comments:

I nearly stepped into a poodle.

It's taken DNA testing, the expert comments of several vets, four years of observable behavior, and enough dog-fanciers' two-cents-worths to pay for her next Nylabone, but we'd pretty well concluded that Leila, the pedigree-deprived rescue dog, is largely akita inu, the Japanese imperial breed. The pink nose is a good sign.

But today, I'm loyally but grumpily walking said beast in the pouring rain, when I have to intervene to stop her eating a dead frog.

A bit of shock, then, for this Englishman to realize his pooch could be part French.
Posted by Alan Beechey No comments:

An idle observation at 10:30 p.m., after driving for nearly twelve hours straight, hypnotized by headlights and hopped up on several cups of coffee and a large Red Bull . . .

If you're heading north on the Henry Hudson Parkway in Manhattan, just as it passes Riverbank State Park in Harlem, and you maintain a speed of about 65 m.p.h., the seams in the pavement make your front and back axles thump in the rhythm of the piano introduction to Michael Flanders and Donald Swann's song The Gnu.
Posted by Alan Beechey No comments: