But I'm not paying any more for the IMAX version.

It's Tertius's birthday. He shows up in the kitchen for breakfast wearing eyeglasses that are just black plastic frames. He says he looks like Austin Powers. I think it's more like Clark Kent.

"These are 3D glasses," he announces, showing me the lettering on the temples. They certainly are, since they seem to have been taken from a movie theater, but the lenses are missing.

"They do," he insists, putting them back on and looking straight at me. He stretches forward with his hand and squeezes my nose. "See? 3D!"
Posted by Alan Beechey No comments:

Thanks, Publisher's Weekly, for a decent review. (Phew!)


"Quiet country life turns out to be anything but in Beechey’s entertaining third mystery featuring children’s author Oliver Swithin (after 1999’s Murdering Ministers). During a nighttime stroll in the English village of Synne, Oliver discovers a dead body hanging from a tree. Oliver recognizes the corpse as Dennis Breedlove, a well-known children’s radio star known as Uncle. From the length of the rope, Oliver believes the cause of death is murder, not suicide (as the village police suspect). Meanwhile, Oliver’s uncle, Det. Supt. Tim Mallard of Scotland Yard’s Serious Crime Directorate, is in Synne rehearsing for an amateur performance of Hamlet. While Mallard warns Oliver and his girlfriend, Scotland Yard detective Effie Strongitharm, not to interfere, they cannot resist investigating. The author provides numerous colorful suspects and several red herrings leading up to a riotous, yet suspenseful resolution that takes place during the final scene of the Hamlet performance."

(Okay, Kirkus, do your worst.)
Posted by Alan Beechey No comments:

Call yourself an American?

As a humorous intro to my presentations, I list the number of murders I have so far accomplished in print:

Pushed off a high building (1)
Shot with a crossbow (1)
Bludgeoned to death (1)
Bludgeoned and then drowned (1)
Hanged (2)
Poisoned (2), including one shot in the bottom with a dart gun.

If you include the completed but unpublished works, there's a strangled, another bludgeoned, and a frightened to death by a six-foot pink rabbit.*

But I've never shot anyone with a gun containing bullets. Yet.

*I know, I know. I'd read that one, too. But it was a badly timed Sherlock Holmes parody, and no editor wanted it.
Posted by Alan Beechey No comments:

A moment with greatness.

Every once in a while, I remember that this blog is supposed to be about writing mysteries. My presentation (see the previous entry) includes several examples of the craft of superb story-telling, and now, thanks to PowerPoint, the audience can see the words up on the screen instead of having to listen to me -- or a hapless participant -- read them aloud.

So in the spirit of exposing you to the best (and exposing my meager graphic design skills), here's one of my favorites, from Laura Lippman's What the Dead Know. It continues a description of a defense attorney, already described as an "alcoholic old lizard." 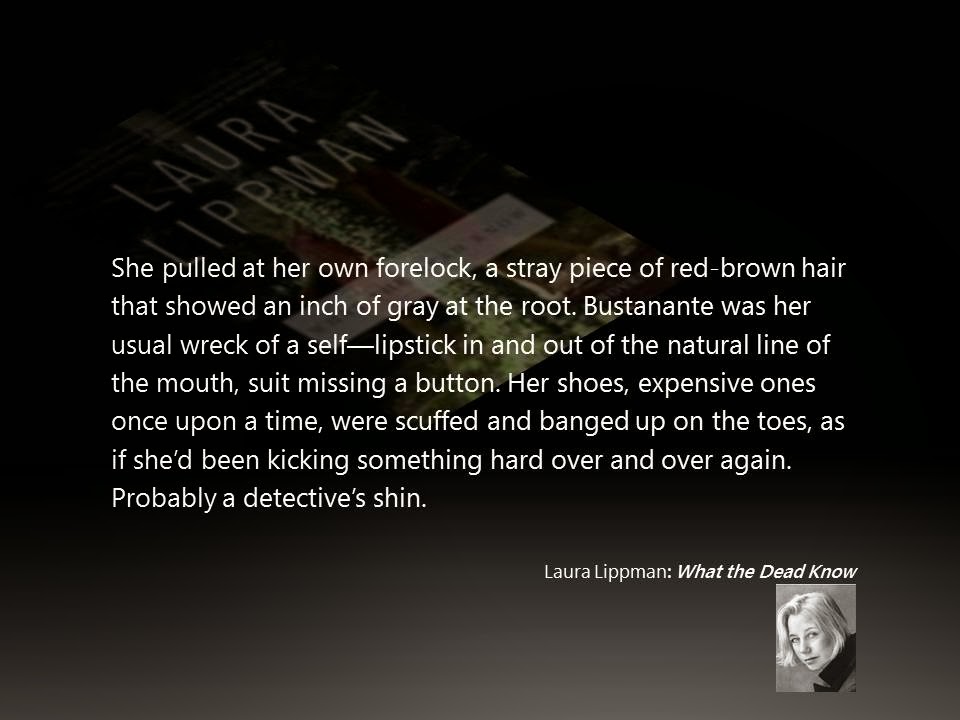 A brilliant instance of the "show, don't tell" mantra. From three sharp sentences ostensibly describing Bustanante's appearance, we see her entire life -- once-elegant past, decrepit present, and a fair anticipation of a future as a serious thorn in the narrator's side. Nothing's wasted. And nobody does it better.
Posted by Alan Beechey No comments:

Kicking and screaming into the, uh, twentieth century.

This year, they fall within a couple of days of each other, and I decide it's about time I went hi-tech. Well, hi-er tech, but that's not hard when in previous years I've managed with a flip chart and a blown-up Peanuts cartoon mounted on a giant piece of foamboard.

My presentation to the young authors is called "Just Shoot, Stab, Strangle, Smother, or Poison Me: Writing the Murder Mystery." For the older punters, it's "The Top Ten Things You Need To Know About Writing a Murder Mystery."

(No mystery about where I nicked that idea. And imagine my embarrassment when at the presenters' dinner I found myself sitting next to the former head writer for "Late Night With David Letterman."*)
The presentations aren't the same, but there's a fair bit of overlap, so I decide to put them both into PowerPoint at the same time.

How do I know it's time for this leap forward in technical wizardry? When 12-year-old Secundus looks at me with scorn and announces: "Nobody uses PowerPoint these days, Dad."


*It was homage, Joe.
Posted by Alan Beechey No comments:

No MSG. Because He'd know.

Primus's teenage posse hangs out in the basement of the local Episcopal church, where one of his friends is the son of the verger. They have an apartment on the first floor of a house that's part of the church complex.

I'm chatting to this friend's mother in front of their house when a car pulls into the car park, containing a confused-looking driver with a Chinese food delivery. She goes over to help.

"Oh, you want the Man Upstairs," she tells him.

And just for a moment, I wonder: "Does He order in?"

I look up in awe toward the church spire, but catch sight of the choirmaster, who lives in the second-floor apartment, signalling from the window that he's on his way down to collect his dinner.

Still, if it had been a take-out for the Almighty, you just know he'd be a good tipper.
Posted by Alan Beechey No comments:

Love what you've done to the place.

The observant reader of this blog* will have noticed that, as well as getting a minor facelift, it's changed its name from "This Private Plot."

The persistent reader of this blog** will have noticed that this follows more than half a year of nothing else happening.

These two facts are connected. We're shifting gears around these parts. For the plain fact is that, up to now, my blog was largely about the stuff that amused me -- generally from my present and past life -- while I was writing, editing, and attempting to sell a book called This Private Plot, the third in the Oliver Swithin mystery series. (Hence the old name of the blog, for the reader who has trouble making connections.***)

But all that changed last year. For the magnificent and highly esteemed folks at indie mystery publisher Poisoned Pen Press agreed to publish not only This Private Plot in a slew of formats, they're also bringing out the two earlier books -- An Embarrassment of Corpses and Murdering Ministers -- in paperback for the first time.

So the blog's downtime is partly due to the distractions of the final edits and text preparation of three books, which all spring from the presses in May (and also partly due to some rather time-consuming health-related stuff within the family, which is all turning out okay).

And now it's back, with a new focus on the entire series from the point of view of a newly published author, but probably still largely devoted to funny crap my kids say and blatant, blinkered adoration of my dog, Leila. Plus ca change . . .