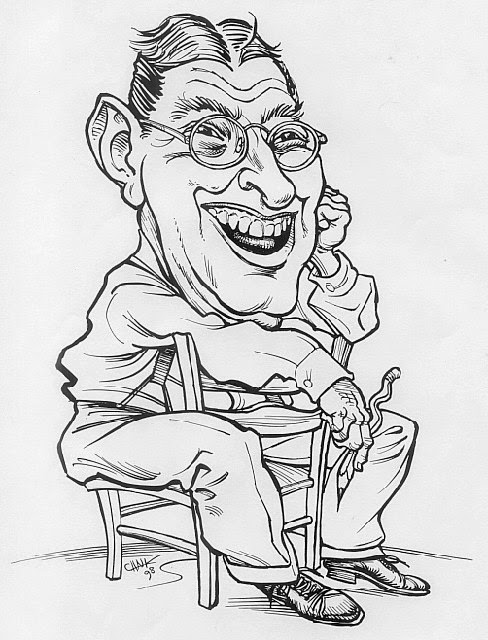 A Word to Husbands
by Ogden Nash

Patient followers of this blog (and, look, sorry about the hiatus, but stuff happened) will know of my adoration of Ogden Nash, not merely because of his wit, dexterity, and rampant humanity (which, as he might have said, is devoid of hue-vanity), but because he's a native of Rye, New York, my current dwelling place.

So judge of my delight when I just discovered that, following a refurbishment last year, our local library, the Rye Free Reading Room, now has an Ogden Nash "Quiet Study" Room. And I'm sitting in it as I write this, in a sun-drenched corner of the building's second floor, overlooking the town square, with City Hall to the right and our historic Square House to the left. (George Washington did sleep there. Twice.)

Alas, although a framed calligraphy version of one of ON's verses hangs just inside the main entrance to this building, the room itself as yet bears no tribute to the great man. Unless, of course, you count the admonition: "Please, no talking and no audio," which might be a modernist rephrasing of the above advice for husbands. Hmmm. . . .

To avert assault and battery,
With words profane and bawdy, oh
Do refrain from chattery
And playing any audio.


Oh, I don't care. Look, one of the best days of my recent life was when I got to take Ogden's daughter Linell and his granddaughter Frances to lunch, just before they appeared at a celebration of ON at Rye's Arts Center. Frances was kind enough to say that the poem I'd blogged about my dog, Leila, was "Nashian" and that she was sure her grandfather would agree. Which is all the excuse I need for re-running it, here, as I sit in the Ogden Nash Quiet Study Room.

Our dog
Is not a possum.
When bigger dogs diss her in the street, she doesn't lie down and play dead till they go away, thinking she's just put one across 'em.
She fearlessly barks right back, which makes her
Ossum.