Barking up the wrong tree.

Back to genealogy. As I said (well, wrote), my adoptive family's bloodlines, flowing through the Beechey family tree, were always an irrelevance to me, something I realized at a very early age. But why did I jump so eagerly into research on the birth family, if that halving of the DNA with each generation quickly whittles away your connection to each forebear?

Overcompensation, possibly. The healing power of a pathway out of the genealogical bewilderment. Some atavistic sense of ancestor worship that overclouds simple logic. But there is also the mathematical fact that, while you may only have a tiny, irrelevant fraction of any one of your 4th great-grandfather's genes, when you add up the contribution of all 64 great-great-great-great-grandparents on that pedigree chart, it comes to 100%. Including the branch back through the Irish seafarers, of which I'm very proud.

But that doesn't mean I wasn't interested in the adoptive side of Beechey and the maternal Goddard. Although my adoptive parents lived, when I was born, in a dull London suburb -- less than ten miles from Hyde Park Corner as the crow flies (and the Underground crawls) -- it was clear that they never thought of themselves as Londoners the way I did. They had moved toward the city from the rural west, a migration from the tiny country villages that now flank Heathrow airport, and their farm-worker parents had been born even further away, in the true English countryside.

I discovered that my mother's father, Charles Goddard, had forged his way to the city as a young man after an argument with his family, whom he'd left in the delightfully named Wiltshire village of Winterbourne Bassett. A few years before she died, I took my mother to visit her ancestral home, which she'd never seen. 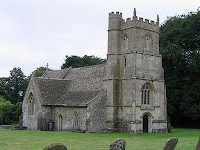 The village is charming, just three miles due north of the great stone circle at Avebury. There's only a scattering of homes, but the parish church is peacefully isolated, with elaborate memorials to a branch of the (nonfictional) Baskerville family. As we wander through the churchyard, I see what I'm looking for -- a weather-beaten grave has the name "Goddard" (and if memory serves, the name and dates matched what we knew of Charles's younger sister).

I call my mother over, and silently point out the inscription. She reads and smiles.

"Well!" she exclaims. "Isn't that a coincidence!"
Posted by Alan Beechey