She remembered. A little prompting, maybe, which wouldn't have been required a year or so ago. I stayed with her a good part of the afternoon. There were stories about her childhood, about her mother's childhood, about early antisemitism, about knowing Burl Ives during the war, about filming with Woody Allen, who let her do two takes for Stardust Memories -- his version first, her version second -- and about needing a hospital checkup afterward to make sure the other actor in the scene hadn't broken her rib.

Her health isn't so good, although she hopes to get past a current problem that restricts her food intake. And she continues her hobby (her "therapy," as she calls it), the note cards made with dried flowers. I remind her that she made a batch for me, at my request, which Mary and I used for our wedding invitations, gosh, thirteen years ago. Two of her designs are framed and hang in our guest bathroom. 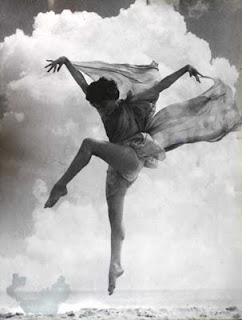 I found the picture I referred to in an earlier blog. It was taken at the Jersey Shore and published in the Philadelphia Inquirer in either 1929 or 1930 (giving Sylvia an age range of 18-20), and it won an award from the newspaper for the photographer, famous for adding the huge, puffy cloud to backgrounds. Sylvia has the yellowing cutting on the wall, but she also has some better black and white prints from the session -- this is my photograph of her framed picture. And it requires a correction:  Martha Graham was later; this was very much under the influence of Isadora Duncan.
Posted by Alan Beechey