The retirement community where my in-laws live is described at its main gate as an "adult lifestyle" community, which sound like a different kind of euphemism.

-------
Formal meals are served in the main dining room in the central building, known as the "Big House." Returning to the family cottage after lunch a little later than the others -- held up by an impromptu game of checkers with Primus and Secundus -- we pause open-mouthed as a solo bald eagle flaps lazily past us, below the tree-line.


-------
The boys have enormous trouble letting go of things, which is obvious from a glance at their over-stuffed bedrooms. They speculate on how much of our beloved minivan can be repurposed when her days on the road are done, unable to handle the concept of selling her in her entirety. In a rare note of fraternal pride, Tertius tells me that I should just give her to Secundus, the would-be Edison. "He'll turn it into a flying car," he declares with cheerful confidence.

(Well, it's about time somebody came up with one. We were promised them, as any consumer of science fiction will tell you.)


-------
We emerge from the in-laws' cottage to drive back to the hotel (which allows Leila to stay in the room with us). The full moon shines through crisply etched clouds like a Dore illustration or an establishing shot from a werewolf movie.
"That moon looks ominous," pronounces eight-year-old Secundus. The writer in me inflates.

"Yeah," he says thoughtfully. Then adds, "Dad, what does 'ominous' mean?" 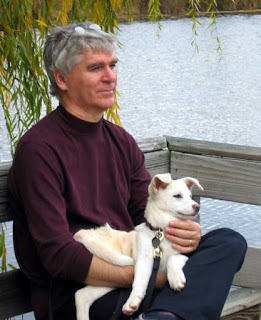 I didn't take enough pictures of Leila when she was a puppy. Here's one of me and the beast in a rare moment of repose. (For her; I'm generally in repose). It was taken by my mother-in-law during our Thanksgiving visit to Virginia in 2007, when Leila was three months old, but I only collected a copy on this visit.
Posted by Alan Beechey

Email ThisBlogThis!Share to TwitterShare to FacebookShare to Pinterest
Labels: dogs