Talking of An Embarrassment of Corpses ("my Embarrassment," as I refer to it for short), the book came out toward the end of the year, perfectly timed for Christmas gifts but already past the deadline for Edgar Award consideration -- at least, that's my excuse. On Christmas Day that year, my brother-in-law Tom gave me a suspicious package, which turned out to be a copy of my own book.  And he and his then wife had autographed it for me, complete with their academic qualifications. Ha bloody ha. But at least it was a sale.

I used this book as my general tote-about copy, including the notes and page-turn cheats I needed when I made the audiobook. (And the egregious typos.) But then it occurred to me that if my in-laws were claiming to have written it, what if other people did as well. I started asking my fellow authors at conventions if they'd also claim it as their own and sign it to me. And they did. S. J. Rozan and Dale Fututani Flanagan added their chop. Carole Lea Benjamin added the signature and pawprint of the excellent Dexter. And memorably, Sparkle Hayter gave it a kiss-print. (Lucky book.) 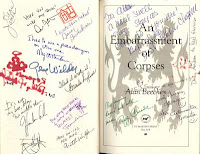 (I didn't have it with me for Janet Evanovovich, but she cheerfully wrote that she loved my work when she inscribed a copy of Hot Six for me. Of course, she's never heard of me. Who has?)
Posted by Alan Beechey

Email ThisBlogThis!Share to TwitterShare to FacebookShare to Pinterest
Labels: An Embarrassment of Corpses, humor, mystery