Later, I go to the optician to get new reading glasses. For books and newspapers, a foot away, I need a 2.25 diopter. But for the computer screen, about two feet ahead of me, a weaker 1.75 diopter provides a crisper focus. (I don't need distance lenses -- I peer over the top. See the picture.) Fed up with swapping my over-the-counter spectacles every time I change close-up tasks, I've decided to invest in some progressive lenses that range over both these strengths. 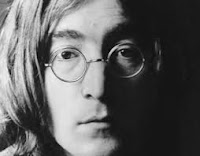 (I have my eye on a pair of round Armani frames, even though the boys told me I looked like a middle-aged Harry Potter* when I tried them on.)

The young lady assistant in the store is very pleasant throughout, but warmly recommends an eye test before buying new glasses. I tell her my last test was only last December, at that very establishment, and these were the strengths recommended by the eye-doctor -- her employer -- at the time, as she can see from my records. I'm not due for another test yet, and I can vouch from the inside that my eyesight hasn't significantly deteriorated.

She makes the case for a test a second time, as if I failed to understand her point. I repeat that I take that point, oh I do, but my needs are clear and simple.

Ah, but now I have defied her expert advice. The horror. She's still pleasant, but the smile has vanished and her attitude suggests that I'm pegged as the village idiot. Sorry, city idiot.**

"But your last test was in December 2009," she keeps saying imperiously. "Since so much time as passed, I do strongly recommend an eye exam before spending money on lenses." "You dummy," is now clearly the unspoken addendum.

"But I know my needs haven't changed in the last nine months," I say, as calmly as I can.

"Which was nine months ago," I say slowly. "This is still September 2010." She frowns, and I watch as a mental calendar passes behind her eyes.

But by now I'm too irritated to stay and try on glasses. Muttering that I'll call for an appointment, I leave the store, and I'll probably go somewhere else. Because what was so infuriating was that even after it dawned on this supercilious female that she had screwed up the fairly elementary task of remembering what year we're in, she neither apologized nor lowered the attitude a millimeter. She was the professional, I was the civilian; I couldn't possibly know what I was talking about. My opinions, since they defied her well-practiced script, must therefore be the worthless rantings of a dimwit, albeit one with an English accent and a nice new haircut.

But what can you expect from a day when we lost the immortal Tony Curtis and, lest the news be eclipsed by Jamie Lee's dad, the far too mortal Greg Giraldo?