You can't make this stuff up. I've tried.

There is no escape from the Planet of Prehistoric Women.

Ya know, maybe there's something to this research stuff after all. I check one fact about a crappy science fiction movie, for the sake of a gag about a famous director, and next thing I'm following a trail of cyber-breadcrumbs back to the Prague Spring. For those of you with 60 seconds to spare and the will to live, here's the deal with Voyage to the Planet of Prehistoric Women.

In 1962, there was a popular Russian science fiction movie called Planeta Bur -- "Storm Planet." It wasn't great, but it contained some well-made scenes of cosmonauts leaving a base on the moon and battling monsters on Venus. As you do. So in 1965, it was edited and adapted (i.e., dubbed) for the American market as Voyage to the Prehistoric Planet.

Just like Godzilla, which, to make the whole thing seem more American, threw in scenes of an isolated Raymond Burr (Perry Mason himself) staring solemnly upwards, VPP director Curtis Harrington cut in some additional scenes with Basil Rathbone (Sherlock Holmes himself) and Faith Domergue of sci-fi classic This Island Earth, who had become Howard Hughes's, er, ladyfriend at age 16, until she discovered he'd been seeing Ava Gardner, Rita Hayworth, and Lana Turner behind her back. That's quite a back. Even for those days, when the stars were bigger.

Harrington was so proud of his efforts that he took his "directorial" credit under the name "John Sebastian." (After J.S. Bach, not the guy from The Lovin' Spoonful, who had the unenviable job of following Country Joe McDonald at Woodstock right after he'd led the notorious "F*** Cheer." Serves him right for turning up unannounced and stoned.)

Er, right. Anyway, another three years pass, during which England win the World Cup, and in 1968, Peter Bogdanovich takes a second swipe at the material,* cutting out Rathbone and Domergue and adding special effects scenes from an even older Russian SF effort called Battle Beyond the Sun, as well as pneumatic actress and occasional Playboy-model Mamie Van Doren (a special effect in herself and, oddly, another ex-flame of Howard Hughes**) and various other platinum blondes of similar heft, who were not wearing fur bikinis. Sea shell bras, remember, this is a blog of record. 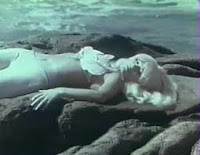 This became Voyage to the Planet of Prehistoric Women, and Bogdanovich was so proud of his efforts that he took his credit as "Derek Thomas." (Not after the former men's basketball coach of Western Illinois University, because he was only two years old at the time. Pay attention.) But I know it was you, Peter. You broke my heart. You broke my heart.

There are a whole load of clips from all these incarnations on YouTube, but honestly, why bother? There are no cute kittens and nobody gets hit in the testicles.

Totally trivial. But it does explain why, in a movie released in the year of the Soviet invasion of Czechoslovakia, "Commander William 'Billy' Lockhart" is played by one Vladimir Yemelyanov.


*Film buffs only: The inspiration of an uncredited Roger Corman is suspected.

**For a guy who didn't get around, that Howard Hughes got around. Mamie Van Doren, who'd be eighty next year if I were not too gallant to mention her age, is still going strong -- here's her website.

***There's no three-asterisk footnote. The "***" in the post represent the missing letters "uck," in case my kids read this.
Posted by Alan Beechey