They're not brothers, they're not Russian, but they probably can fly.

To Manhattan, on a perfect summer day for strolling through city -- sand painters and modern dance and sunbathers in Washington Square Park, street fair on West 4th, stands offering dogs and cats for adoption in Union Square, not too close to each other. The boys complain their legs hurt after three blocks -- we need more exercise like this, clearly.

We're going to see The Flying Karamazov Brothers, that amazing troupe who raise juggling (and music and comedy) out of the range of mere human skill up to levels that make you suspect midnight pacts at  crossroads. Check out this video, for the love of Mike. 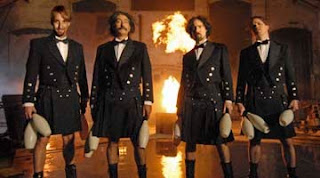 I may not get out much, but that endless sequence where all four performers are juggling clubs and then three of them line up into a firing squad and begin to randomly exchange clubs with the fourth is equal to my most thrilling moment of theater ever, and it didn't disappoint this time.

Two minutes, three minutes . . . clubs no longer coming straight but hurled high in the air, shot like torpedoes, performers pirouetting between catches, shooting the clubs around their backs. And the catcher flawlessly trapping every projectile, folding it into his pattern, hurling a club back with quicksilver reflexes in time to grab the next one that flashes into his peripheral vision.

Four minutes . . . You want to clap, you want to cheer, you want to leap to your feet, you know you should, but the entire audience is mesmerized. And then the hollow clunk as a club hits the stage. One performer stops, disgusted, holding just two clubs now. The others go on. "I'll get it," he says, and walks through the flying clubs and back to his place, unscathed. Even pardonable fumbles are part of the act.

After the show -- a less than full-capacity matinee -- we had the chance to talk to the performers, and we discover that Amiel Martin (not in the picture), who appeared as an understudy for troupe founder and show director Paul Magid, was giving his first ever public performance with the team. Since Paul was there -- looking perfectly healthy and taking pictures of the quartet in this unique configuration -- I have to assume this substitution was an opportunity to groom a potential new member. If so, bravo, kudos, props to Amiel, who handled it perfectly. And that included being the catcher in the sequence I just described and "The Champ" in "The Gamble," successfully juggling three items contributed by audience members -- yesterday, it was a water bottle, a hero sandwich, and a string of sausages. (The last time I saw Paul Magid as the Champ, he was given a Barbie doll, a jellied egg, and a plate of whole squid.)

If you're within reach of New York City, drop everything and go to the show, at the Minetta Lane Theater. If you've never seen the Flying Karamazov Brothers, (different link from the last one) find out when they're next in your area and go. Go, I tell you!

Why are you still here?