I am not alone.

I thought I'd made a breakthrough in Beatles scholarship, but it was not to be. 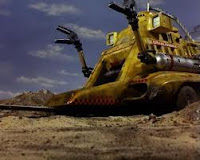 I was watching an old episode of Gerry Anderson's classic puppet TV show "Thunderbirds," as you do, reliving memories of 1966.* It was about an out-of-control giant logging machine called "Crablogger," which naturally goes crazy and starts heading for a dam. Can International Rescue stop it before the village is destroyed?

(Of course they can, duh, whoop-de-doo, but there was always a certain disappointment among my friends when any structure survived the show without exploding in a fireball.)

But it rings a bell. "Crablogger" sounds a lot like "Crab-a-locker." As in "I Am the Walrus":

Crab-a-locker fishwife, pornographic priestess, boy you been a naughty girl, you let your knickers down.

This episode of "Thunderbirds" was first broadcast on October 9, 1966. (John Lennon's birthday, incidentally.) About this time, John heard that his old English teacher at the Quarry Bank High School was making his class analyze Beatles lyrics, so he deliberately threw some unfathomable gibberish into the song he was currently working on, which turned out to be "I Am the Walrus." The crab-a-locker line follows a couplet -- "Yellow matter custard, dripping from a dead dog's eye" -- that is more directly inspired by the schoolyard chants of John's childhood.

But have I stumbled on the origin of the mysterious "crab-a-locker"?

Since most online references to the Beatles' lyrics cite "crab-a-locker" as a nonsense word, I'm rejoicing in my discovery. Alas, too early. One Google entry directs me to Ask.com, where an anonymous contributor has recently made the same observation.

So there's someone else out there who remembers enough about 1960s cult kids television and John Lennon's psychedelic output to put two and two together, nearly half a century later?


*The year that England won the World Cup, of course, and therefore the greatest year in the history of civilization. I reached the age of ten, horrified to find out on my birthday that just because you get an entry in the tens column, it doesn't make you a teenager.

And not exactly reliving, because in 1966, these kids shows were broadcast in black and white in England, although they were filmed in color for the US market. Thunderbird 2 was green, huh? I'd always imagined it as red.
Posted by Alan Beechey