Back after a break. 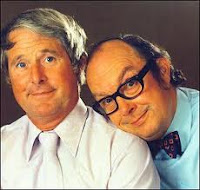 Over the holiday, I managed to see "Eric & Ernie," the new BBC TV biopic about the early days of Britain's greatest double-act and most beloved comedians, Eric Morecambe and Ernie Wise. A truly wonderful piece of film-making, endearing but without being sentimental, and helmed by a fine performance by comedian and writer Victoria Wood as Eric's pushy stage mother. (Victoria had the idea for the film in the first place.)

A companion documentary charts the pair's progress from where the biopic left off, and reflects on what made them so memorable and so influential. (Their humor stayed on the right side of the Atlantic, so to give American readers of this blog some perspective, Morecambe and Wise are as important in Britain as Laurel and Hardy are in the history of American comedy. Except that Stan Laurel is also English.)

Their glory days on British television came in the 1970s, largely because of the genius of their writer, Eddie Braben. Although Eric and Ernie are long gone (Eric died in 1984, Ernie in 1999), Braben is still with us, aged 80, and concludes the documentary with this magnificent thought on the widespread popularity and legacy of the duo. Certainly an inspiration for me as a comic writer.


“How’s this for an ego trip?" he says. "Sometimes, I can see a group of people at a bus stop. I think to myself, you may not know it, and you don’t know me, but at some time in your lives, I’ve made you smile.”
G - I know you've got more pressing things to do than read this, but in case you do, here's yet another vibe for a fast recovery. The title of this entry -- a Morecambe and Wise catchphrase, as I don't have to inform you -- clearly doesn't apply to you.
Posted by Alan Beechey