Many readers have commented on the unusual names I give my characters. (One reviewer called the practice "Dickensian," and I take that as a gigantic compliment, even though it probably wasn't intended to be one.)

There's a reason for that, beyond the fact that I just love names. In a mystery, when you need to introduce several suspects plus the usual repertory company plus the walk-ons and extras, it's essential that you make each character as memorable as possible. Distinctive names help.* (I recall an Agatha Christie novel in which two of the suspects were called Richard and Robert, and I could never keep them straight. But maybe that's what the wily Dame was counting on, Gawd bless 'er.)

So as well as the "where do you get your ideas?" question (to which I reply, with solemn veracity, "in the shower"), I often get the "where do you find these names?" question. The boring truth is that I've kept a growing list of potential character names for years in my ancient Filofax, going all the way back to a long perusal of the classic four-volume London telephone directory in my teenage years.** (Which is where I found the name "Strongitharm.")

But life hands me gifts. When you go into Staples, a large sign tells customers of the special store representative to whom they should address their technical questions. On Sunday, that person was the melodious and improbable "Stafford Gumbs."

Sorry, Stafford, if you ever Google yourself and find this blog, but you'll soon be fictional.


*Nobody seems to have spotted the rude joke hidden in the company name "Woodcock and Oakhampton," both characters in An Embarrassment of Corpses.

**Back in the 60's and 70's, the standard four volumes were A-D, E-K, L-R, S-Z, these letters prominent on the thick spines. They were installed in every London phone box, on a peculiar swivel-out arrangement, but we also had a set at home. Now imagine, like in so many offices, you had all four books lying in a stack on a shelf or on the top of a filing cabinet. And, as so often happens, they were in the wrong order, so the third volume was on top of the second. It would be perfectly possible to trace the word D-A-L-E-K through adjacent letters. 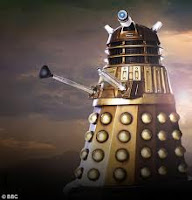 When Terry Nation created the Daleks back in 1963, for the new BBC series "Doctor Who," he told the Daily Mirror that the name "came from a dictionary or encyclopedia volume, the spine of which read 'Dal - Lek.'" But according to the 1988 The Official Doctor Who & the Daleks Book, Nation later admitted that this book and the origin of the Dalek name was completely fictitious, and that anyone bothering to check out his story would have found him out.

I merely offer another potential source, other than Nation's imagination, based on my original research.
Posted by Alan Beechey