How to make yourself invisible. Fail.

On the eve of Thanksgiving, one thing I'm thankful for is that I was in Avery Fisher Hall (the home of the New York Philharmonic) the evening this happened, even though it's a funny memory without a punchline. So I'll add one when the time comes.

It is, of course, regarded as rude to applaud between the separate movements of musical work. That's a time for rustling your programs and coughing consumptively. Nor is it good manners to leave the concert hall between movements, or even between works. Ideally, if you can't stay for the whole concert, you should piss off during the intermission.*

I once saw Leonard Slatkin start the second half of a Philharmonic concert with Vaughan Williams's brief, melodious little lollipop, the Fantasia on Greensleeves. Then, without leaving the podium, no doubt so would-be fugitives from modernism had no cover for their escape, he launched into the grinding discords that begin the same composer's angry but ultimately lyrical Fourth Symphony. Ah, but the notoriously unadventurous New York subscription audience is made of tougher stuff. One hint of a D-flat and a C played fortissimo at the same time and silk-clad pensioners were out of their tip-up seats and fleeing up the aisle like Leila after a squirrel.

That wasn't the memory. Sorry. You get that when you read a blog by someone with ADD. Personally, I don't see it as a drawback. Did you know that "orchestra" is an anagram of "carthorse"?

Anyway, you get used to people leaving a concert between works, irritating though it is. No doubt if they wait until the very end of the performance, they won't make it back to New Jersey in time for Leno. But on this one occasion (now we're back with the memory), an elderly couple seemed to make up their minds to leave just a little late. And for some reason, they chose to depart through the emergency exit at the front of the hall, which meant walking up the empty aisle toward the orchestra and then along the first row in front of the stage. So the lady naturally adopted that peculiar style of locomotion that she clearly thought would make her invisible to a concert hall full of people -- hunching her shoulders, bending forward, and walking on tiptoe with a prowling gait, like a tall heron stepping out of a helicopter. The man just ambled after her, meekly carrying her fur. 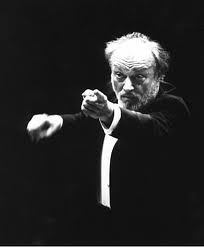 The trouble was that, by now, Kurt Masur had taken the podium and was about to start the next work. Catching the movement out of the corner of his eye, he did the best double take I've ever seen by a conductor of a major orchestra. He lowered his baton, turned, and simply watched the pair as they slowly stalked across the front of the hall immediately beneath him, unaware of his magisterial scrutiny and convinced of their invisibility. The door opened and closed behind them. Maestro Masur looked up at the audience, gave a long-suffering, adagio shrug of helplessness and turned back to the orchestra, shaking his head in disbelief. (Zubin Mehta would have arranged for their immediate beheading in the lobby.)  A delicious moment.

That's it. Okay, it's a vignette that needs a punchline. How about: "And that's why the Republicans now have control of the House of Representatives."**


*Although I remember this once tripped up the audience at an outdoor concert at Caramoor. The program was, perhaps injudiciously, all six of Bach's Brandenburg Concertos played in sequence, with an intermission in the middle. The problem was that the first concerto has the typical three movements, but these are uniquely followed by a long, segmented fourth movement. A lot of optimistic concertgoers calculated that this was, in fact, the second concerto. So when the actual second concerto ended, and the performers left the stage during the reshuffle of instruments, there was a partial exodus in search of refreshments. Re-enter the string players for concerto number three, to watch half their audience trooping out of the tent, realizing their mistake, and ruefully squeezing back into their the seats, treading on the toes of the better-informed audience members who'd stayed put. That memory doesn't have a punchline either.