People sometimes ask me who I think would play my characters in the movie ("Hello? Hollywood, are you listening? Movie rights for sale. Help me, Obi-Wan -- you're my only retirement strategy.") I don't know who could do Oliver right now, but for a guideline, I often cite the appearance of James Spader in 1994's Stargate.

But oddly enough, Oliver's appearance is partly based on a real actor, called Robert Longden. (Oliver's actually an amalgam of a fellow psychology student at Oxford, Longden, and a Chase Manhattan banker who used to work for my ex-wife, who all shared a vague resemblance. Not my ex-wife.) It was Longden's appearance in a 1980 Agatha Christie television play that registered with me, but no amount of Googling or Binging has brought a picture of that performance to light. And then yesterday, I was watching a documentary on advertising from Britain's Channel Four, which included a segment on Peter Seller's last work -- a 1980 television commercial for Barclays Bank that was shelved following Seller's death a few days after filming ended. His costar was the young Robert Longden, and here's a screen capture of him from that long-unavailable film. 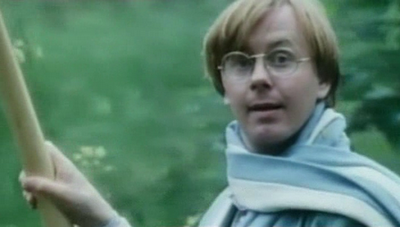