Although Oliver is supposed to be the hero of the series, I'm beginning to suspect that I have more fun writing Effie Strongitharm, his police-officer girlfriend; and as a male writer, I'm particularly pleased when female readers find her complex and credible. Effie's most salient physical characteristic -- apart from a degree of attractiveness that leads critics to wonder what on earth she sees in Oliver -- is her remarkably curly hair. Here's a picture of actress Kate Beckinsale, where she seems to have temporarily adopted the look that Effie, like Frieda in Peanuts, achieves naturally.

But there's no secret about the origin of Effie's curls. They belonged (also naturally) to Julia, my girlfriend of the late teenage years -- hair so remarkable that sooner or later it had to be preserved in fiction. (Although Julia's resemblance to Crystal Tipps, the heroine of an animated TV series for kids, was well noted at the time.) 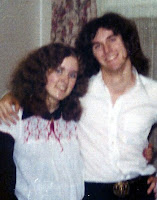 When I contacted Julia many years later to sheepishly report that I had borrowed her appearance and some other characteristics for Effie, she graciously agreed to be flattered by the portrayal and not sue me for copyright infringement or defamation of character. And she also sent me this picture of us both from 1975 that not only gives a fuzzy indication of those amazing tresses, but also shows that, at that time, I could give her a run for her money. They say that if you can remember the sixties, you weren't there. The problem with the seventies is that you do remember them, even if you don't want to. Especially the hairstyles.
Posted by Alan Beechey