The wolf's at the door. Make that inside the door.

Good article by Evan Ratlif in February's National Geographic about the DNA of dogs.

Our domestication of the dog has, of course, gone on for millennia, gradually creating and refining breeds for their skills in, say, herding and hunting. But in the space of the last hundred years or so, there's been an explosion of selective breeding, sometimes for specialized behavior, but largely for appearance, which has rapidly brought us to 350 to 400 different breeds of dog around the world, the greatest diversity of any species.*

That artificial evolution had the effect of isolating genes with a large impact. So all that superficial variety of shape, size, coat, snout length, etc., comes down to just a few genetic factors. For example, "the difference between the Dachshund's diminutive body and the Rottweiler's massive one hangs on the sequence of a single gene." (By contrast, height in humans is determined by up to 200 genes.)

The National Institutes of Health has analyzed the DNA of 85 dog breeds to see if genetic similarities of the entire genome - -- not just those affecting morphology -- reveal the patterns of earlier selectivity in the long journey from wolf to Chihuahua. Not surprisingly, the broad groupings that emerge include herders, hunters, and the mastiff-like dogs that would have been bred for protection. (And some oddities -- the classic sheepdog-trial dog, the Border Collie, has very little of the DNA that suffuses the other traditional herding breeds, including the Rough Collie.) But a few breeds -- less than a dozen -- have a profile that is still substantially wolflike "suggesting that they are the oldest domesticated breeds." 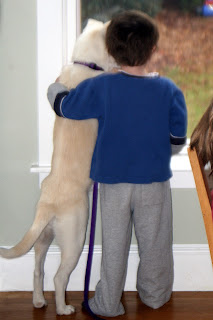 When we had Leila's DNA tested to see what was in her mutt mix, the test came back with strong hints of Chow Chow and Akita (presumably the Japanese variety, from her appearance), with a soupcon of Chinese Shar-pei.

Ahem. These three breeds are, respectively, number two, three, and six on the "wolflike" list, with scores well over 90%. Most of the other breeds tested have less than 10% wolf in their mix.

She's already a menace to squirrels and rabbits. We'd better add little pigs, small girls dressed in red, and Daleks** to that list.

**Pop culture reference there for the terminally nerdy.
Posted by Alan Beechey