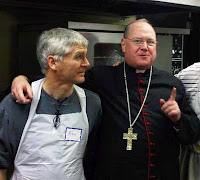 Dedicated followers of this blog may remember this picture from Christmas 2010. That's me and Archbishop Timothy Dolan of New York. (In case it isn't clear, the Archbishop is the one on the right.)

Now, just a year later, it's been announced that Archbishop Dolan is shortly to be made a Cardinal.

Just a year. A year after a moment or two with his arm around my shoulder.