Happiness is a (luke-)warm pun.

Following a link from an online recommendation for a laptop case, I get to Amazon's page for the Pelican 1450 Case with Foam for Camera. Here's the picture that goes with it: 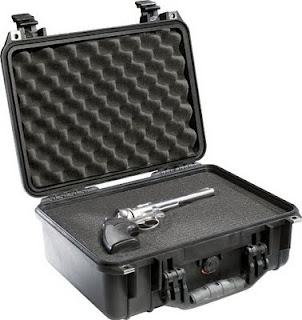 Okay, putting the sheer horror aside and avoiding any rant about the Second Amendment, lets get to the funny.* Puns about shooting -- "point and shoot" included -- too obvious. Can't do "automatic exposure," because it shows a revolver.  Jokes about a "Canon" are way off. Good when you're shooting for stock? Nah, too obscure a reference for both photography and guns. Similarly anything about "opening up." Similarly "Magnum."

Anything mixing up "Arbus" and "arquebus"? Oh wow, that's really scraping the bottom of the barrel.

No, I respect your judgment. Hmmm.

Only for photographers of the highest caliber? Great for a news report? Could do a gag about your work being in a gallery? Or in a magazine. (But again, it's a revolver! I'm a mystery writer -- have to get these things right.) Something about Henri Cartier-Wesson? Or a "Smith & Weston"? (Could be W. Eugene S. and Edward W., or sons Cole or Brett, whose images I prefer to his dad's. Centenary of Brett's birth this year, incidentally.)

Well, since we're going that way, here's one for the cognoscenti. Ahem.

"This case must belong to Harry Callahan.**"

**Put it in Wikipedia and see what happens.

I think I once owned a Harry Callahan, a later print of his 1954 image "Eleanor, Port Huron," if I recall. Included his wife's bottom. Lost it in a divorce. Me, I mean, not Harry, although I suppose if he'd divorced -- which he didn't -- Eleanor would get to keep her bottom. I got to keep the Cartier-Bresson. No bottoms, though. Did you know we all have them?
Posted by Alan Beechey