Talking of Harmondsworth (see last entry), this is the Middlesex village where my late (adoptive) mother was born and where my aunt (her elder sister) and cousin still live. It's about thirteen miles from the center of London. My grandfather's job was to take produce from the surrounding farms to the London fruit and vegetable markets, probably Covent Garden. In those days, nearly a century ago, this was a day's round trip by horse and cart.

Harmondsworth sits a little north of the main road to Bath, connected London-wards by quiet country back lanes to the neighboring villages of Sipson and then Harlington, which was where my father was born, during the First World War.

Around the same time, a few acres of the vast Hounslow Heath just a mile or so south of Harmondsworth were turned into a military airfield for those newfangled "aeroplanes."  The spot was near a tiny hamlet called Heathrow.

By the Second World War, Heathrow Airport and its supporting businesses had leveled most of the land south of the Bath Road (including the farm laborers' cottages where Dad came into the world, now the site of the airport's telephone exchange). But despite the encroachment of one of the world's busiest airport, Mum and Dad never fully accepted that they'd become de facto suburbanites, even after they moved a couple of miles further east to Hounslow. As for "London," a mere dozen miles away and eventually part of their address, it was to them a distant, impenetrable maze, rarely visited and much dreaded by my mother in later life. 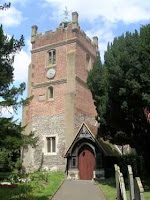 For what seems like a decade or more, the present-day inhabitants of Harmondsworth, Sipson, and Harlington have lived under a shifting life sentence, as various plans for the extension of Heathrow Airport added injury to the continuous insult of noise and air pollution and road traffic by threatening to raze many of their homes and encircle the remainder. At one point, Harmondsworth's twelfth-century church (left) and historic tithe barn -- Britain's largest (below) -- seemed destined for destruction. Later, it was the entire village of Sipson that would be flattened for that third runway.

But within the last couple of weeks, the UK's new coalition government of Conservatives and Liberal Democrats have permanently scrapped all of the previous Labour government's plans for Heathrow's expansion. A victory for homes and communities and history -- and for the power of a persistent grass-roots protest.

This is the best possible outcome for the villages where I knew so many people when I was growing up and still have relatives now. But it came from a Tory-dominated government. What's a die-hard lefty to think?