I bought my first guitar when I was fourteen, a fourteen-quid piece of crap that I nicknamed Gladys in total ignorance of B.B. King's similar naming habits.

Until then, my instrument was the wildly phat oboe. (It was supposed to be a gateway toot to the saxophone, but I never got that far.) However, the terminal unhipness of this member of the woodwind family didn't stifle my ambitions for budding rock and roll fame (after all, the original line-up of Roxy Music included an oboist, or "oh-beast" as my mother always pronounced it), and my first planned line-up for a band was me with Chris Cockayne and Jeff Fanning, two cello-playing fellow thirteen-year-olds. Combined, we had the sex appeal of a bottle of paint brush cleaner.

I mention this because the first of many suggested names for this luckily abortive combo was "The Psychedelic Octopus*." Which brings me neatly but glibly to Paul, the psychic octopus.

You can tell the Americans are finally embracing soccer: they're ladling out statistics by the, er, ladle-full. I always thought this US obsession with stats was to stop the punters nodding off during the long lulls that occur in baseball and American football. The football played by the rest of the world, with its two 45-minute halves of continuous action -- so irritating to commercial television -- didn't need to bother with esoterica, at least in my day. There was nothing more taxing to the memory than "Who won the FA cup in 1958?" (Bolton Wanderers, who beat Manchester United 2-0) and "Who scored a hat-trick in England's 4-2 victory over West Germany in the 1966 World Cup final?" (Geoff Hurst, of course) and that's about it. Statistics were for cricket -- a game that's longer than baseball, but just as fast. Which means just as slow.

Soccer is all about possession. If the other team has the ball, no matter where they are on the pitch, you'd better show a desperate avidity to get it back that would make Gollum look like Ghandi, or before you know it, you'll be picking the precious out of the back of your own goal. Ask the England squad. 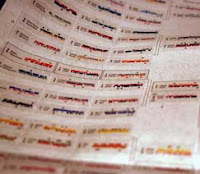 This morning's New York Times includes a stunning information graphic all about possession. Somebody has determined, for all the games played so far, which team touched the ball more, on a minute by minute basis. Ninety minutes per game, plus thirty minutes overtime for several matches. Translated into a row of ticks color-coordinated to team strip, like a long bar code. Sixty-two matches altogether. All in a space that's about a third of a page. Oh, America admit it -- you love this stuff!

The Netherlands has a pretty respectable history of possession in all their games. But fellow finalist Spain's record is a virtually unbroken ribbon of red, dominating their opponents in every match. And for that reason -- and because they're very, very good -- I'm picking Spain to be the winners tomorrow afternoon, probably 2-0.

And that fortunately puts me in agreement with Paul, the psychic octopus at Germany's Oberhausen Sea Life Aquarium. Presented with his mussel snack in a choice of two containers, each marked with a national flag, Paul has correctly predicted the final outcome of all of Germany's games in this year's World Cup, including their loss to Spain in the semifinals (which scored him some death threats) and today's German victory against Uruguay for third place. And when asked about the final, Paul chose Spain, despite the fact that the average Spaniard would see him more as a tapas than a clairvoyant. See it here.

Which leaves only one question. Not how does Paul do it. (Of course he has an opinion about soccer -- with eight legs, he's 36% of a side on his own, and he'd never be guilty of a hand ball.) But whoever thought about asking him?


*And talking of musical octopuses in 1969 and aquatic beasts called Paul, a belated shout-out to Ringo on the occasion of his 70th birthday.
Posted by Alan Beechey