The image of Effie again.

I was watching a very old episode of the Rik Mayall, Adrian Edmondson comedy series "Bottom" from 1992, and I spotted a potential Effie in a very early career appearance of Julia Sawalha, soon to find fame as the magnificent Saffy in "Absolutely Fabulous" and then to go on to many other great roles, including voicing a hen in "Chicken Run" opposite Mel Gibson. (I registered her first as Mercy Pecksniff in the BBC's 1994 "Martin Chuzzlewit," when the equally wondrous Emma Chambers -- Alice in "The Vicar of Dibley" -- played her sister Charity.)

I'd forgotten that, in those early days, Miss Sawalha's hair was approaching the curliness of the fictional Effie. But this was also the first time I'd identified an actress who didn't merely match my visual image of the character, but who I felt could have performed the part to perfection.

There are plenty of images of the lovely Miss S. all over cyberspace, with the whole gamut of hairstyles, but I wanted to find her specific appearance on that Mayall/Edmondson show. So I Googled the phrase "Julia Sawalha Bottom." 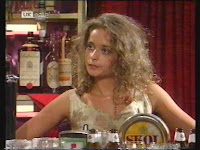 It is to her credit that nothing inappropriate showed up, despite having "Safe Search" off, but I apologize nonetheless to anybody and everybody for any misunderstanding. I think the look says it all.

(Further proof that she'd have made a great Effie, incidentally.)
Posted by Alan Beechey