Hair today. Still. All of it. It's just a different color these days. 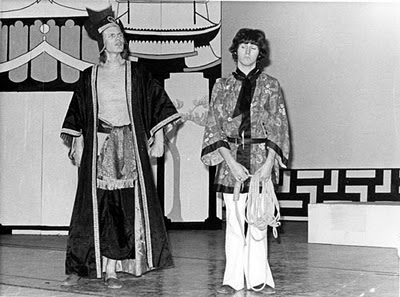 More hair from a bygone time. Talking of Extreme Englishness, here's a picture I found of Isleworth Grammar School's 1973 production of "The Mikado." I am on the right, playing Nanki-Poo, a wand'ring minstrel, a part I earned not because of my acting talent, but because I was the only tenor in the sixth form who could hit a top A-flat full voice. (I still can. I just can't hit anything lower with any accuracy.)

The fine young thespian on the left playing Koko, the Lord High Executioner, is my friend-emeritus, the great and good Robb Johnson, for whom Gilbert and Sullivan was a gateway drug into the world of performing/songwriting/recording and fame. Robb, I discovered much later, was kind enough to mention me by name in his classic song "Hounslow Boys." (His "Anarchy in Hackney" remains my favorite song ever.)

Robb is a songwriter who cares and who matters. For a taste of the simple power and the sheer bloody relevance of his work and his words, check out this YouTube video of "I Am Not At War."

Nothing of Robb's early start in amateur light opera or his time with me as his closest friend during our late high-school years has found its way into his online biography, but I refer you anyway to that page of A Break in the Clouds, his official website.

(Privately, he has thanked me for showing him how you can spice up the three-chord trick by adding the relative minor chord of the key into the progression, but that was the point -- 35 years ago -- when his skills as a guitarist overtook mine.)
Posted by Alan Beechey