To White Plains this morning for my seventh appearance at the annual Young Authors Conference, this year bringing in about 250 talented students from eighteen high schools around Westchester county. Our hosts were the nice people of Pace University, because our customary haunt in Valhalla was being used for something else.

But as if looking at all those bright teenage faces wasn't enough of a reminder of my advancing years, there was a jarring lesson in my workshop.

To set up a prompt for a writing exercise -- come up with an intriguing and magnetic opening line for a story -- I put up a slide with this immortal phrase:


"It was a dark and stormy night."


Now I'm aware not one of them is going to know that its first major appearance was on page one of the 1830 novel Paul Clifford by Edward Bulwer-Lytton. (I only know because I have to.)

These days, we remember Bulwer-Lytton best because of the annual bad writing awards named in his honor. But in his time, he was a best-selling author who grew phenomenally rich from his work and gave us the phrases "the pen is mightier than the sword" and "the almighty dollar." Edward was also an English member of parliament, ended up in the House of Lords, and is buried in Westminster Abbey, so no slouch. He had his ex-wife committed to a lunatic asylum because she wouldn't stop slanging him off, even after their divorce (although public opinion released her), and in 1862 he was offered the crown of Greece, when the previous King Otto abdicated. (He demurred.) 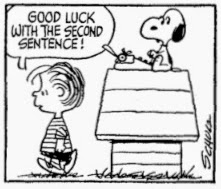 Anyway, as I said, I didn't expect Bulwer-Lytton's name to be thrown out when I casually asked if any of my young audience had come across the phrase before.

But surely, surely, at least one of them recognizes the work of Snoopy?