Seven billion people in the world. And none of them reading my blog.

Overpopulation. It's a problem. Too many people sharing too few resources, too few jobs, too small a space.

It even shows up in nursery rhymes. Take this classic:


Five toes, five piggies. Seems logical. Or is it? Is this just another example of overstaffing and redundancy? Perhaps a classic time and motion study would reveal greater efficiencies. 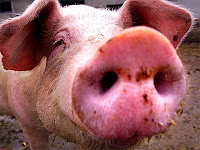 This little piggy had roast beef. A third piggy? Not necessarily. Either of the first two piggies could have had the roast beef. The piggy who went to market may have paused in the middle of a busy morning’s shopping to have lunch. Can you picture him, sitting in a small bistro just off the market square, bags of groceries stuffed under the table, tucking into a plate of rare sirloin, stuffed chestnuts, and a truffle or two (hold the chipolatas)?

But maybe it wasn't a food market. Maybe our gadabout piggy has headed for the nearest cybercafe to day-trade in financial stocks, while munching on a pastrami Reuben. Or maybe commodities are more his line -- after all, who else would know so much about pork belly futures?

Or perhaps it was our first piggy who had the roast beef. Alone, vacuuming in the apartment, having divided the weekly chores with his fellow-swine, he gets a little peckish around lunchtime and cuts a cold slice or two from the Sunday joint to make himself a sandwich. Either way, no need yet for a third piggy.

This little piggy had none. Again, still no need to posit a new piggy. We’ve already learned that only one of the first two piggies ate. Clearly, the piggy left crying ‘Where’s the beef?" is the other.

And this little piggy went "wee, wee, wee, wee" all the way home. Is there any doubt that this is the same piggy who went to market, now returning to home base? The only mystery is what caused his pathetic cries of "wee."

And here I think we have a valuable clue to the identity of the piggy who noshed on the roast beef. Consider the two scenarios. Either the piggy who went to market had the roast beef or he didn’t. Is the weeing all the way home, therefore, the result of indigestion after eating a suspect piece London broil, or is it hunger pangs? Which of these would cause him to wee so liberally? Personally, I vote for hunger pangs. And thus we can flesh the story out . . . 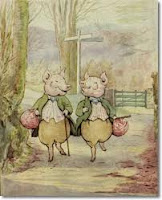 Two piggies, both alike in dignity, share a household – perhaps the very same brick house that withstood the huffing of the Big Bad Wolf in another tale.

"What shall we do today?" cries one, stretching and tumbling out of bed on a Monday morning.

"We’re out of everything," declares the other, no doubt the more enterprising of the two, glaring balefully into the empty refrigerator. "I must go to the market or we’ll be dining on three olives and a jar of expired mayo."

"Ah, stay home," cajoles his laconic comrade. "I've got a new DVD -- 'Sows Gone Wild.' We’ve got some leftover roast beef from the weekend. I’ll curry it for lunch"

"No, no, I must go. Frankly, Lionel, I hunger for adventure, for the wide-open spaces, for the world. Farewell, dear brother. The future beckons."

And thus he heads off to the Piggly Wiggly. His brother shrugs and opens a bag of pork scratchings.

Flash forward a few days later. A hammering on the door in the middle of a wild and rainswept night. The first piggy, brown bathrobe flung hastily over pajamas, nervously lifting the edge of the curtain. His cries of joy as he wrenches the front door open to admit the haggard, staggering form of his beloved brother, weak from hunger, and barely able to articulate.

"Yes," croons his brother, helping him to bed. "We can have roast beef."

Is it too far-fetched to see the parable lurking here? When you strip the rhyme to its bare minimum, surely this is the tale of The Prodigal Son, the one brother seeking his fortune in the big city, with the tawdry temptations of its so-called "market." But a market for what? 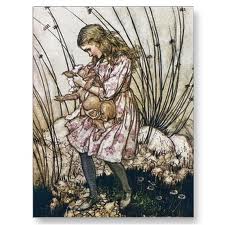 Ruined, demoralized, high on the hog, will he be forced to sell his body to the night, to the treacle-voiced tempters who murmur "bacon cheeseburger," to the greasy faced women who hunger for his loins? He’d rather live like a pig.

And so he runs home, curly tail between his legs, to dine once again on . . . was it roast beef? Or was that joyful reunion really celebrated with a Fatted Calf? (I won’t get into the implications of interspecies cannibalism on the farm.)

Some scholars claim that we need five piggies for this drama because humans have five toes. But reduced to its basics, the true allegorical nature of the story emerges, as surely as if you read it backwards to hear the hidden bovine messages. ("Hail Elsie! Hail Elsie!")

There is only one possible conclusion. This rhyme was composed for religious purposes by somebody with only two toes. Probably a born-again sloth.

Next time on Population Control Theater, how they could have made the Harry Potter movies with three actors and a false mustache.
Posted by Alan Beechey