I've already had cause to mention in these chronicles the time in 1964 when my (adoptive) mother, a devout woman, looked up from a newspaper article and asked me if I knew what was "The World's Best Seller," and I replied John Lennon's "In His Own Write," when I clearly should have said the Bible. (See the footnote to last September's The Walrus was Nowhere.)

Mum and Dad liked the Beatles, but they were shocked at the "more popular than Jesus" comment Lennon made a year after this first incident. Mum reported this news to me in a grave, slightly self-righteous manner, which always made me feel as if I was partly responsible when my idols misbehaved. 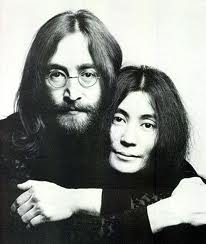 Her disapproval deepened with 1969's "The Ballad of John and Yoko," because the chorus began with the blasphemous exclamation of "Christ!" I suggested that "Christ, you know it ain't easy" was possibly a direct appeal to Jesus for his sympathy. (I tried not to draw her attention to the "they're gonna crucify me" part.) She was having none of it. It offended her, and that was that.

Well, forty years on (and thirty after his tragic but hardly senseless assassination), there's a very good article in this week's Newsweek about John Lennon and the cult of celebrity that entirely agrees with my interpretation of the line. Ha! I knew it.

You know, there can be little doubt that, in the world of entertainment, the Beatles are the most iconic celebrities ever -- in terms of sheer cultural impact outshining Valentino, Sinatra, Marilyn, Michael Jackson, even Elvis. And John and Paul were the two most famous Beatles. But add John's greater flair for publicity, his stronger voice, his contributions beyond music, his very public and then very private life and -- of course -- his murder, and it's possible that, this week, we're commemorating the death of the most famous person there ever will be. Sorry, Kanye.
Posted by Alan Beechey